On July 24, 2019, a process server knocked on a door in Tulsa, Oklahoma with eviction papers in hand. He attempted to serve Christopher Barnett, a former GOP candidate for governor who ran in 2018 and finished eighth in his 10-person field. Security cameras by Barnett’s door captured the scene as the process server attempted to serve the papers before being shot in the elbow. Although the server’s injuries were non-fatal, the incident still reminds process servers everywhere how quickly a normal serve can turn lethal.

Who is Chris Barnett?

Perhaps unsurprisingly, this is not Barnett’s first instance of aggression towards others. On his website, he posted a blog post explaining a 22-step plan for executing a mass shooting at the University of Tulsa complete with the weapons-of-choice, the way they would be set up, and when to achieve maximum casualties. This did not pair well with his collection of ten firearms.

His online threats also included disparaging remarks directed towards the faculty at the University of Tulsa, where Barnett’s husband was studying theater. His husband was consequently suspended and the couple sued the school for $75,000, claiming the suspension was a breach of due process. The lawsuit was later dismissed with no award for damages.

But perhaps most relevant is the evidence of Barnett’s aggression towards process servers. On his social media prior to his run-in with the process server, he posted the statement, “The only good process server is a dead process server.” After an investigation, it was also uncovered that his Google search history included the question, “can you legally shoot a process server?” His husband testified that this was his search resulting from his own experience with a process server. 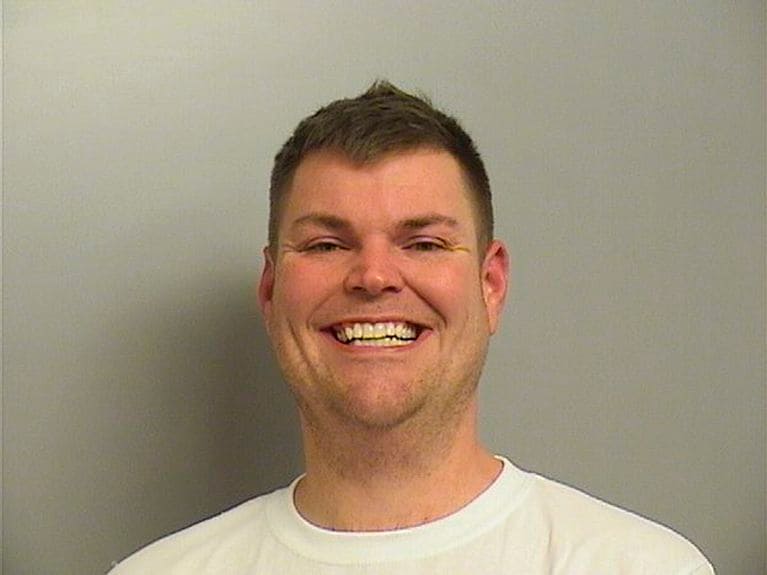 Details about the event in question are established reliably by the multiple video angles and audio recording captured by the process server.

The process server, who has yet to be publicly identified but who court records show has been licensed since 2018, knocked on the door of the Tulsa residence and asked for Christopher Barnett. Upon answering the door, Barnett responded with several death threats, repeating, “Get off my property, or you’re gonna be dead.” After a brief back-and-forth, the process server turned to leave but hesitated on the lawn, returning his attention to Barnett and saying, “I’ll wait for you out here, okay?” There was then a puff of smoke as a shot was fired from the front door, causing the process server to run away, holding his injured arm.

Soon after the incident, Barnett was arrested by the Tulsa police and charged with assault and battery with a deadly weapon. The next day, he was released on a $75,000 bond but was arrested again on July 26 for his aforementioned blog post threatening the University of Tulsa. He proceeded to plead “not guilty” to both felonies, claiming the process server threatened him with a gun. However, no gun can be seen in the footage and, while the server was carrying a gun at the time, police confiscated the weapon and determined it had not been fired. According to Barnett’s defense attorney, Barnett should not be prosecuted because he was within the rules of Oklahoma’s Stand Your Ground law. His attorney was also responsible for releasing the security footage to the public. In regards to the online threats against UT, Barnett’s defense claims his words are protected by the First Amendment.

Barnett’s next appearance in court will be August 26th, 2019 for a preliminary hearing. The assault charge carries a punishment of up to life in prison.

Fortunately, this incident also resulted in potential legislation put in place for process server safety. A State Representative from Lawton, Oklahoma, Rande Worthen, pushed House Bill 1162 during the 2019 legislative session. If successful, this bill would make it a misdemeanor for harming a process server. The actions of Barnett, Worthen says, reinforce the need for protections to be passed by the state legislature.

“This past session, I looked to strengthen laws to help protect our state’s private process servers," Worthen said. “As officers of the court, they play an important role in ensuring our judicial system runs as smoothly as possible. Unfortunately, they sometimes find themselves in dangerous situations while fulfilling their duties. Wednesday’s incident in Tulsa, where a private process server was shot while serving papers, highlights the need to provide additional measures to keep them safe. I plan to readdress this policy next session, where we’ll have an opportunity to continue working to hopefully provide protection for private process servers.”

House Bill 1162 passed the House but was amended in the Senate before being passed. The House did not take up the amended bill before the session ended. The Second Regular Session of the 57th Legislature convenes on February 3rd, 2020.

While scary, incidents like this are a harrowing reminder for process servers to always take their own safety into account. You can find resources for process server safety below and be sure to keep the following things in mind as you serve:

This case might look a lot different if it weren’t for the audio and video recordings captured. Whether it’s via body cameras or simply recording audio on your phone, think about recording your serves so that there’s indisputable evidence in the event of an incident. Just be sure to check your local laws to check what kinds of recording devices are legal in your state.

Due process is important but not more important than your life. If threats are made by a subject either verbally, physically, or with a weapon, do not hang around to see whether or not they mean it. Return to the safety of your vehicle and document your service attempt in full. Also, be sure to make it known to other process servers in the area when a subject is hostile. Erin’s List is a resource to share dangerous serves and help protect fellow process servers.

Learn how to diffuse tense situations

This takes practice and experience but put in the effort to learn the best ways to diffuse tense situations. You can do this by asking mentors, taking classes, or reading about the experiences of others online. But remember that part of this is recognizing when a situation is too far gone and the only solution is to walk away.

Be ready for anything

Being prepared looks different for different people. Some people like to be armed, some do not. Some people wear bulletproof vests, others simply wear clothes they can easily run in. Whatever preparation looks like for you, keep in mind the basics of letting someone know where you are going, having a first aid kit in the car, and being aware of your surroundings so you know where to go in case of an emergency.