Getting Serious About Service of Process by Social Media

Alexandria, VA — The Federal Court in Virginia has turned heads with its recent decision to approve civil process service by social media. Although its scope is limited to serving international defendants, it is still an important and influential ruling that is making many in the industry wonder if widespread service by social media is coming soon.

While at first glance it seems appropriate to keep up with current methods of communication and technology, service by social media is not without complications. Is it really an acceptable means of communication? How can receipt by the appropriate person be verified? How can civil process servers legally show due process? Questions like these, among others, are common when considering service by social media as a valid means of civil process service.

We use social media to locate an individual, but I’m not sure it’s possible to use social media to effectuate service on the correct person. Right now, I don’t see it as a viable method of service, especially with cases of fraud (fake profiles, emails getting hacked, etc.). Maybe in the future, if getting verified e-signatures becomes mainstream or something like that, but not now.

In a recent post in the Linked In group, Pam Sween of Sween Investigations in Arizona explained that “I have emailed defendants before, per instructions from the attorneys after attempting to physically serve, mail, and posting of the docs at multiple addresses. I think email could be a more valuable element of the service but not on it's [sic] own. It is one more way you tried to contact them.” Taking a different perspective, Rich Ulbrich of Accutech Investigations, LLC also offered his opinion. He commented, “If you think that service by email is not going to happen..think again.” He continued, stating that there are “ways to confirm an email was received and opened, and at what IP address, et al. Particularly if they have a workplace email address. [...] Technology will overtake this sooner [rather] than later for many reasons, the least of which is [sic] speed and monetary savings.”

For the most part, process servers have voiced their discontent with the idea of service by social media because of difficulties in verifying that the correct party has actually been served. We talked with Jeff Spar of Virginia Court Services who explained that he has personally seen advances in technology affect his business. For example, he explained that subpoena and garnishment records can now be faxed, whereas in the past those documents had to be hand-delivered. 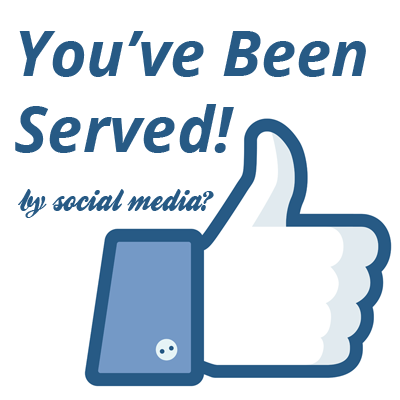 Undoubtedly, the civil process service industry as a whole has undergone major changes as technology has changed and improved. And after reviewing some literature on groundbreaking cases in the history of civil process service and how it has been affected by technology and/or social media, we found that there has been a marked trend of US courts moving toward accepting alternative means of service (social media, email, fax, etc.) when defendants were otherwise unable to be served. From The Richmond Law Review's recent article, Superpoked and Served: Service of Process via Social Networking Sites, US Courts first saw service by fax in 1980 in the landmark case of New England Merchants National Bank v. Iran Power Generation and Transmission Co, in which courts authorized service of process via telex after failing to personally serve the defendants in Iran. That’s right, this was in 1980, folks— more than 30 years ago. In the 2000 case of Broadfoot v. Diaz, the courts boldly commented that “The federal courts are not required to turn a blind eye to society’s embracement of such technological advances.”

And indeed, they have not turned a blind eye. Now, we’re seeing more instances in which US Courts have allowed or will allow service by social media. These decisions echo the sentiment of previous rulings in which service by fax or email are accepted in lieu of personal service in cases where defendants are particularly difficult to serve. The only difference seems to be the method of service, from personal service to faxed service, then to email, and from email to social media. The technology has been updated for special cases but not embraced unequivocally by the courts— it is still only accepted on a limited basis. Despite this, the question still lingers: is the approval of alternative service, although limited, going to remain limited in scope, or will it become the accepted mainstream method of service? Only time will tell. 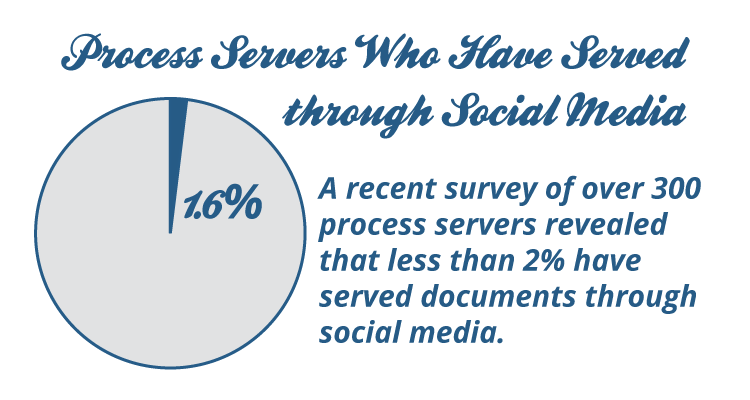 Our conversation with civil process server Jeff Spar also brought to light other ways that process servers use social media. He explained that “We use social media to locate an individual, but I’m not sure it’s possible to use social media to effectuate service on the correct person. Right now, I don’t see it as a viable method of service, especially with cases of fraud (fake profiles, emails getting hacked, etc.). Maybe in the future, if getting verified e-signatures becomes mainstream or something like that, but not now. It’s a person’s constitutional right to be personally notified, and I just don’t think email or Facebook is the way. In Virginia, once an individual is notified, they can actually be charged with not cooperating. It’s good and bad.” Spar stated that technology would definitely have an impact on the process serving industry. He explained that his company has already expanded to include more PI work and security/personal protection in anticipation of lost business due to changes in technology.

I am skeptical that it will be widely adopted by other Courts, and I believe the practice of serving process on parties through social media is far from becoming accepted throughout the legal system.

To get an attorney’s perspective, we also spoke with Attorney Jeff Ricke, Shareholder of Hiday & Ricke, a collections, subrogation, and related pre and post-judgment litigation firm in Florida. He explained that the ruling is extremely narrow and should have little impact on the majority of civil process service, as this ruling deals with service of a party to a lawsuit that resided in a foreign country. He also offered his perspective on the ruling and implications for the future, stating “I am skeptical that it will be widely adopted by other Courts, and I believe the practice of serving process on parties through social media is far from becoming accepted throughout the legal system.”

We want to know what you think. Sound off in the comments!

If you would like to read more about the history of civil process service by social media in the US, you can also read more in Accepting Social Media for Service of Process in the 21st Century, from The Louisiana Law Review. And finally, this excerpt from Preventing You’ve Got Mail From Meaning You’ve Been Served, published originally in The John Marshall Law Review also provides a unique perspective on the subject.