With each new year bringing legal updates to the industry, staying on top of what is current can be a challenge. 2016 has brought forth many new changes for process servers — on both the federal and state levels. Most of the new laws/amendments seem to work toward simplifying processes by allowing for alternative means of service and cutting down on excessive time limits.

Read on to see what’s new in the civil process serving world. It certainly won’t be business as usual in 2016. 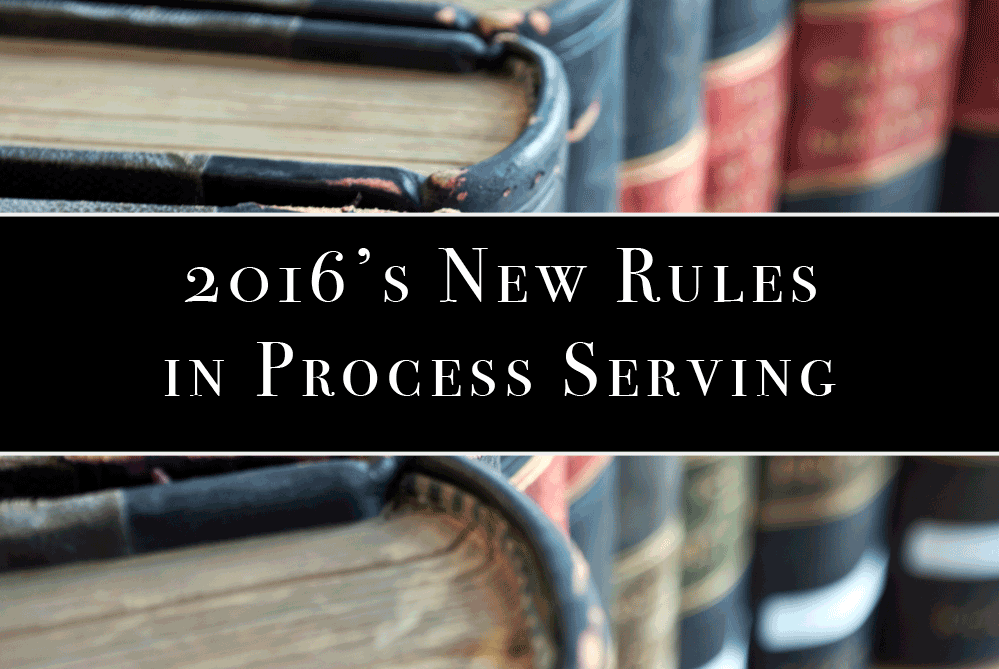 As of December 1, 2015, there were several amendments to the Federal Rules of Civil Procedure that were put into effect. Amendments to Rule 4, 16, and 26 most directly affect process servers:

This rule was changed to increase efficiencies by reducing the amount of time to serve a defendant. Previously, process servers had 120 days — but as of December 1, 2015, they will only have 90 days.

This amendment also echoes the intent to streamline the judicial process. The time for the judge to issue the scheduling order was reduced from 120 days to 90 days (for defendants who had been served a summons and complaint) to just 60 days (from 90) for those defendants who had appeared).

Prior to December 1, 2015, parties were prohibited from serving discovery requests until after the Rule 26(f) conference. The amendment essentially does away with this restriction. Once one party has been served with a summons and complaint, another party may be served with document requests after 22 days. This is despite the fact that neither party will have held the required Rule 26(f) conference. This rule also allows for the defendant to request documents on the plaintiff or other party before answering.

For specific Illinois Supreme Courts, there have been a few changes that specifically relate to process servers:

This change now puts language into the FRCP that acknowledge and legitimize electronic inboxes (email) as a means of acceptable communication.

This change authorizes the Department of Financial Services to create an Internet-based transmission system for electronic transmission to accept service of process.

We wrote about the quiet passing of this bill in August, and it has gone into effect as of January 1st. To read more about the implications that this law presents, and more information on the detail of the new law itself, please see our previous post.

The statewide implementation of e-filing continues into the new year, and will continue through 2018 until it is fully implemented throughout the state. As of January 19, 2016, the Clark County Circuit Court will move forward with e-filing.

From the Minnesota Courts’ website, effective July 1, 2016, use of the eFile and eServe system by attorneys, government agencies, guardians ad litem, and sheriffs will become mandatory in all district court cases statewide.

Statewide implementation to be completed June 2016. You can find the complete schedule here.

Mandatory e-filing implementation continues in 2016. The Oregon Court website issued a pamphlet, which outlines all dates regarding e-filing.

More mandatory e-filing. All counties in Texas will be required to efile as of July 1, 2016. You can see the schedule here.

The trends show that as technology grows more pervasive into everyday life, it also has made its way into the civil process service industry. The bulk of the new rules implemented in 2016 are focused on modernizing processes, making them more efficient and compatible with today’s technology. This should continue throughout 2016 and in the years to come.

Just as the U.S. Post Office was revolutionized by the advent of email, we may see electronic service options increase for those who seek out civil process service. But, just as the US Post Office continues to be a communications staple in the U.S., so shall the traditional means of hand-delivered service.

Be on the lookout for bills in the U.S. Congress that aim to streamline processes (e.g. decreasing time limits to get things done), as well as requiring and/or creating more options for civil process service. Hopefully, these changes will make processes easier — not more difficult — for process servers.