Interacting with the Police as a Process Server

When to Call Police 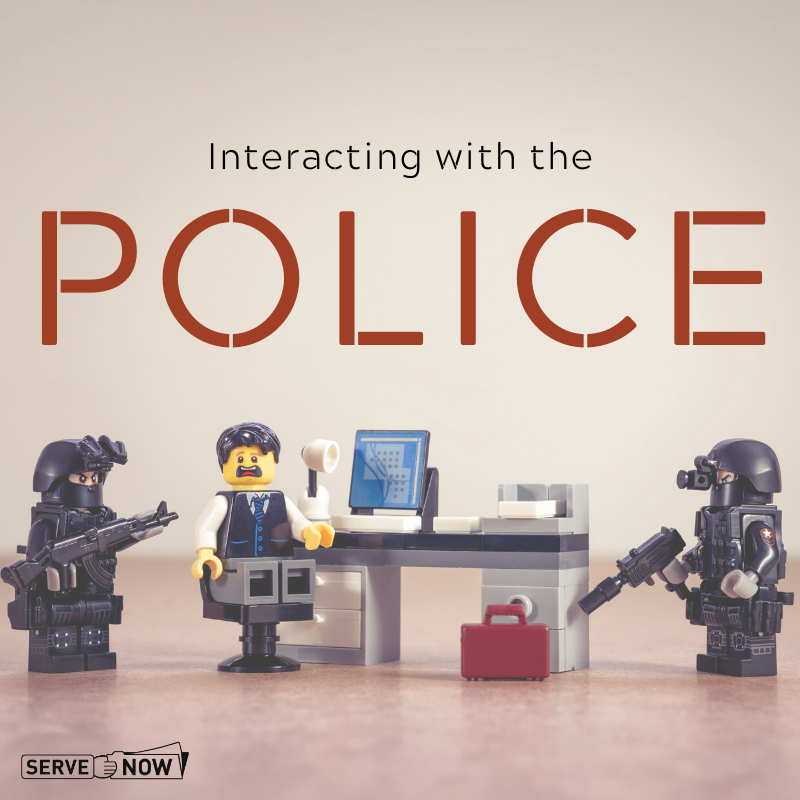 In the event that a process server feels their safety and/or well-being is in danger during a serve, the process server should contact local police immediately. Unfortunately, process server assault is a sincere concern that should not be taken lightly. There are a number of states with legislation that makes process server assault a felony. Even if you do not wish to file a police report, having the police present can help de-escalate the situation and document it. Process server Jeff Bell out of Citrus County, Florida explained, “I have not called [law enforcement] for assistance but one time and that was at gunpoint.”

The other situation in which the police should be called is in the event that you are told that the police were called on you. In those instances, do not leave; however, get to a safe area if you are in danger. Once there, it may be helpful to call the police as well to let them know your location and the situation from your perspective. As both a police officer and process server, Ken Ringo of Ringo's Detective Service in College Station, Texas, explained, “If you are told the cops are called do not leave. Make sure you are in a safe area and give them a call as well. Let them know the situation they are getting into.”

What to Do When Police Are Called

If a defendant calls the police while you are attempting to serve that individual, the most important thing to remember is to stay calm. Negatively reacting to the police being called on you, (or if you are in a situation in which you need to contact the police), letting emotions fly only complicates matters. Staying calm and respectful is the best disposition. Always follow the commands of a police officer on scene.

Additionally, make sure that the police know who you are and why you are there. Have the papers you intended to serve in hand. Process server Ringo further advised, “Show the documents you are there to serve, explain who you are and if you can access your bodycam. Show the footage. I have always had a positive reaction because I follow those exact rules.”

Ringo also related a situation in which the police were called on him after he attempted a serve: “I had one instance where I never had any contact from someone inside. I left the residence to see the police going to it. Had one turn around on me, I pull over, [and] he approached me. I followed those rules and they escorted me back and helped me complete my task.”

While it should not be standard practice to call law enforcement to help with serves, when necessary, they can absolutely be helpful. In Tennessee, process server Chris Wilkinson advised, “I always have great response from our local police departments... they've been great!” The same sentiment was felt in South Carolina from Diane Giddings, “Always had law enforcement support me. Never really had a negative experience with them.” From providing protection to diffusing situations or even helping you get the individual served, law enforcement is in your corner.

For example, if a defendant contacts the police, they may provide an added benefit of confirming the identity of the individual to be served. Process server Jeff Bell also related: “When local police arrive, they usually inform you as to the recipient's identity. I have dropped served a few after PD verifies the complainant’s name. So yes, [it] can be helpful. Also, then I state [on the affidavit] as identified by local PD and witness by officer.”

Additionally, in some situations, police officers are potentially able to help with accessing an individual to be served. If an individual who needs to be served does not believe you can go on their property to serve them and the situation becomes contentious, the police can help explain your job and allow you to complete the serve.

However, this may not be the case in every county in every state, so keep in mind that a crime may need to be committed before police will respond. Retired police officer and current process server Dave Goodman explained, “Police in my county will not get involved unless a crime has been committed. The standard response is that if you are a registered process server the risk is an inherent part of the job. I am a retired police officer, so I understand their side of it.”

There are other situations in which an individual to be served is trying to evade a court order, in which law enforcement may feel obliged to step in. Such was the case in one instance for Ohio process server Matt Greminger, who related his experience: “I had local police and TSA give me an armed escort PAST security straight to the plane where I was to serve someone with a civil protection order. The court didn't want her to intentionally violate the order and so they wanted her served as she reentered the state. Both Cleveland Police and TSA cooperated and got me right to the plane before it was even unloaded. BEST SERVE EVER!”

If you find yourself in a situation in which the local police department is called to your serve, things likely escalated. No matter how important the job, always put safety first.

Have more information or your own stories about interacting with police officers as a process server? Share your experience by joining our groups on LinkedIn* and Facebook or contact us.

*To join the conversation, join the ServeNow group on LinkedIn.