Handling Confrontations as a Process Server

When civil process servers are tasked with completing a service, they never know what they will face. Will the recipient be willing to accept the documents? Will the person be expecting them? Will they be caught off guard and angry? Until the server approaches that person, they won’t know. Due to the unpredictable nature of the job, it is important for process servers to be equipped with certain skills to handle confrontations if and when they arise. We asked process servers how they deal with confrontation and received a variety of responses that can help you in the event your next serve ends up being confrontational. Keep reading to learn what they said. 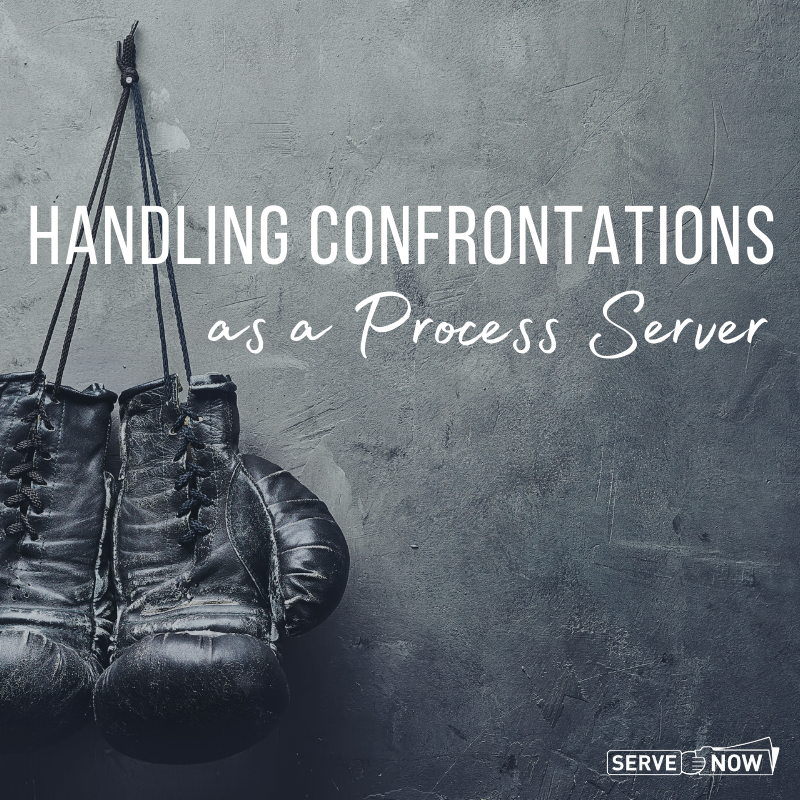 The old adage, “An ounce of prevention is worth a pound of cure” certainly applies to tactics that can be used to prevent confrontation from occurring in the first place. Process servers David Flatter, Steven Scho, and Joni Montesi Stankaitis all recommended that servers drive the location of the serve during the day to familiarize themselves with their surroundings, and if there is any reason for concern, have a spotter accompany them on the serve. Having a second individual available to contact police or facilitate a speedy getaway gives servers an extra ounce of prevention to prepare for a confrontation. Several other servers said that having personal protection on their person was important, with many citing pepper spray or gel and clipboards as self-defense tools, among other means of self-defense.

Many process servers advocate for approaching the serve with simplicity and kindness and in such a way that a confrontation is avoided. For example, process server Wyllymae Williams advised, “I use the word ‘simply’ a lot. ‘I’m simply going by the information I was given.’ If it is a phone number, I call or address.” Stephanie Witherspoon of Superior Servers Process Service out of North Carolina also advocates for kindness and understanding, citing that kindness prevents confrontation. Witherspoon stated, “I find that being as kind as possible actually prevents confrontation. I’ve been serving for eight years and can count on two fingers the number of confrontations I’ve had. And they were mild. It sets the tone. I have nothing to prove. It’s not worth it.”

The language servers use when approaching the individual to be served appears to be a big theme when it comes to avoiding confrontations. For example, process server Chris Jeffery explained, “I tell them in a very confident but not overly authoritative voice that I have nothing to do with their case and that I am just delivering the documents. I do not argue with anyone and will just tell them to have a great day and turn around and leave. The faster you serve the papers and leave the less likely you are to escalate things.” This sentiment was echoed by several process servers. Elizabeth Ostman also offered the following advice: “Be kind and honest. I am an independent party either appointed by the court or sheriff who they must use to deliver these documents to you. [...] My job is to assure you have notice for Due Process.”

Diffuse and De-escalate a Confrontation

If you find yourself facing a confrontational individual while attempting to effectuate service, there are some things that you can do to diffuse and de-escalate the situation. In addition to preventing a confrontation, the language choices a server makes can also go a long way in diffusing a situation.

Jim Belli offered the following advice from his past experiences in corrections officer training: “Interpersonal communication skills. Best thing to do is LISTEN more, SPEAK less. Let them vent while you execute an exit strategy.”

Many others advised making sure the intended recipient knows that you are merely a messenger and that you do not read the paperwork.

Body language is also important, according to some servers. Avoid approaching the individual in a cocky manner and instead, behave calmly and with a pleasant demeanor. Process Server Chris Hope explained, “It’s all in the approach. If you act like the UPS man just making a delivery you generally get people who take the papers and close the door. If you act stupid and confrontational or like you are expecting confrontation you will get exactly what you are looking for. Treats for dogs and a generally happy demeanor towards kids and family members go a long way.”

Many advised thinking of serving a family member and how they would want to be served. A few servers even noted that their stature and demeanor have helped them avoid confrontations.

Another tip is to wear a body camera. Process server Scott Frank explained, “Use a body cam, that helps! When they know they are being recorded, they behave better. I found when I started using a body cam people became more cooperative!” He further added that “Safety is most important. We as servers have no clue who is behind the door.”

Although drop-service is not allowed in all states, in some states and circumstances, it is legal and allowable to either post service or drop serve the individual. In situations where the process server can corroborate the hostile situation with video evidence (such as from a body camera), it can be useful down the line.

Joel Johnson of the Aubor Group in High Point, North Carolina explained that his firm’s policy is to drop-serve when faced with serving a known hostile recipient. He explained, “Assuming the hostile person is the intended recipient, my firm's policy is for the server to drop the paperwork and immediately leave the area. No words need to be spoken and no further interaction is required. I hold my servers to high standards and expect them to de-escalate, not instigate.”

In some situations, it is necessary to contact the local police or sheriff’s office for assistance. If your safety is in danger or you’ve been threatened with harm to your life or person, do not be afraid to contact the police.

Process Server Matt Greminger told of an incident in which the intended recipient, who was supposed to be expecting the documents, became hostile and threatened to shoot him. He left and ended up contacting the police for assistance, “I asked them if they would be willing to go there afterwards and make contact, letting him know the docs were there, and [if] I could photograph it from a distance from my car. Local PD was more than happy to assist, and I got a photo of the guy taking the docs. Not sure what happened afterwards because I got out of dodge, but had the local PD not offered to assist, I would have just left. No serve is worth losing your life over.”

Once the individual has accepted the papers, the process server’s job is complete. The completion of paperwork, etc. can be done safely inside the server’s vehicle, or better yet, when they get back to the office or a safe space. Especially when dealing with a potentially hostile or hostile individual, it is best to get the job done and get out. That way the server is not escalating the situation or putting anyone (including their own person) in danger. Leaving as soon as possible is the method that most process servers seemed to abide.

Process Server Rylee McGee said the best way to deal with that type of situation is to, “Get in and get out. I live by it.” When asked how he would handle a confrontational situation, process server Steve Hutson advised servers should leave, “Walk away. I just got paid.” Similarly, process servers John Wylie and Daniel Jason Halloway said they ignored reactions, opting to complete the job and move on.

Hostile situations and confrontational individuals are unfortunately part of the job in today’s world. It is important that process servers arm themselves with enough knowledge and training to protect themselves from harm. Process server assault is very real and continues to occur all over the United States. Avoiding confrontations or handling them appropriately is the best way to avoid an unsafe situation — and above all, regard your safety over the serve. Listen to your gut and get out if things don’t feel right.