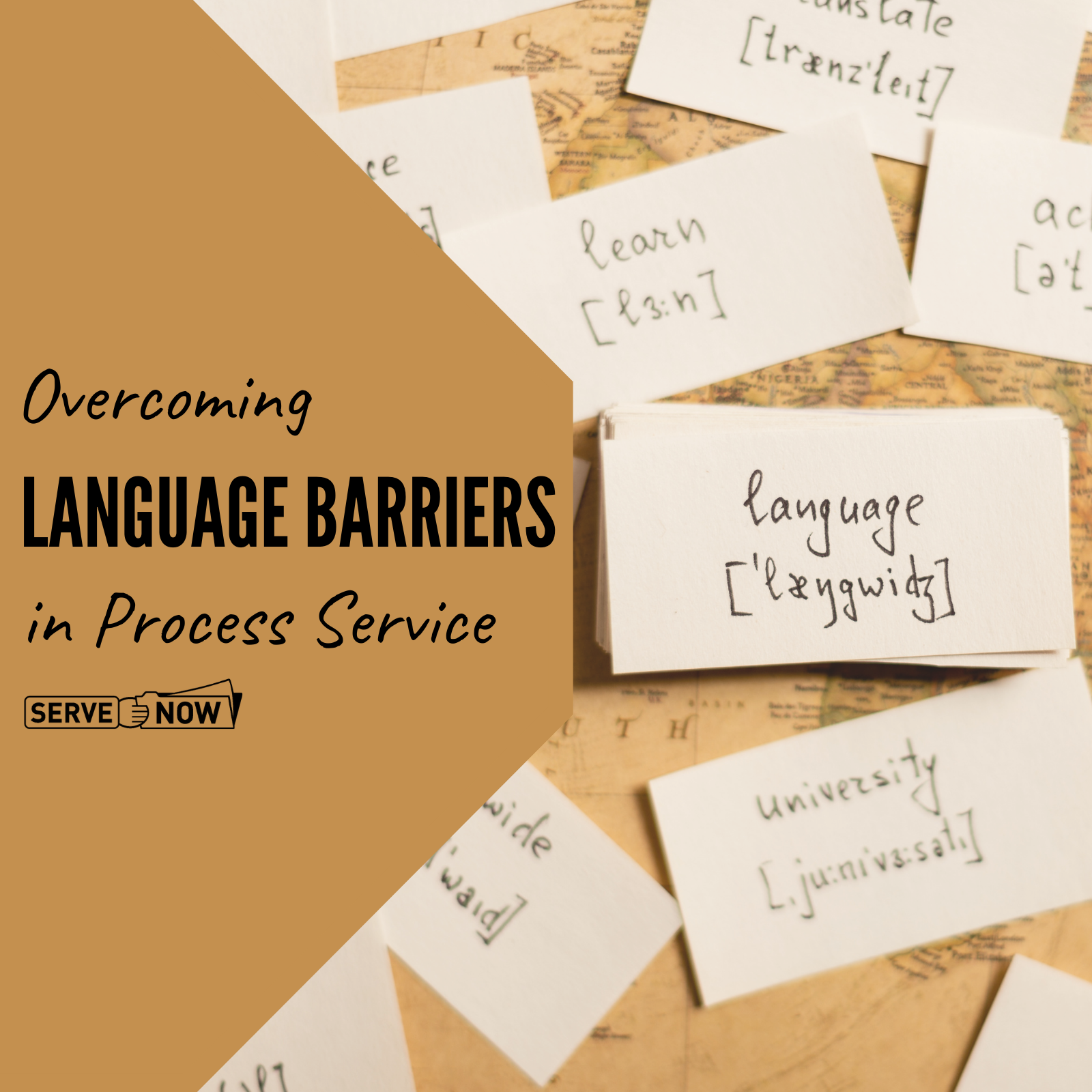 Process servers never really know who is on the end of the serve until they come face to face with that individual. While TV and movies have painted the job as such where papers can simply be dropped at the recipient’s feet with a quick “you’ve been served,” professional process servers know that the job involves much more than that. Part of the work of a process server involves speaking with the individual to be served to confirm their identity. This important part of serving process can be made infinitely more complicated when language barriers exist. Learn some tips that you can use to better handle language barriers while trying to serve process.

Find out what language is spoken before the serve

Gathering the right background information is critical when preparing to effectuate service of process. Simply knowing what the individual looks like and where they live is sometimes not enough to complete service of process quickly and efficiently. For process servers working in areas where multiple languages are frequently spoken, make it a habit of asking what language the individual to be served speaks. Preparation is key!

One process server advised that, with the help of a client, she was able to create a flyer that was printed in Chinese. This flyer was something she could easily print and include on serves as her work area was in an area in which many people were fluent in Chinese. Having a flyer that explains what is happening in multiple languages is a great way to avoid language barriers when trying to get the serve done. Ask for help from someone fluent in the language you wish to translate.

Use Google Translate (or a different app)

Most process servers advised that they use the Google Translate app to automatically translate or interpret a different language. Servers report that this app is easy to use and just like having an interpreter by their side.

Thousands of visitors come to ServeNow each day looking to hire process servers like you. Join our network and start getting more clients today. Learn more

If your business is in a position to hire a process server, you may take care to hire one who also speaks one or more of the commonly spoken languages in your work area. This can remedy communication issues that may arise when attempting to serve process on someone who speaks another language.

Finally, process servers can take the plunge into learning a new language to eliminate the language barrier. While this takes time, it can certainly help solve a problem. If you’re considering learning a new language, several programs can assist you on that path. Pay attention to the languages spoken in the area that you work. Learning a language that is frequently spoken in your area may help you down the road. Programs like Rosetta Stone, Duolingo, and Babbel are designed to help people learn while on the go. There are many other language learning programs from which to choose, so find one that you feel most comfortable learning. Remember, contrary to some popular beliefs, it is never too late to learn a new language!

Overall, there are many challenges that process servers face. However, language doesn’t have to be one that puts a stop to the serve. Take advantage of cutting edge technology or expand your repertoire by learning a new language. With the United States being the melting pot that it is, you never know when you’ll run into a subject who speaks a different language. Hopefully, these tips will help you handle language barriers with ease.

Here is the phrase "you've been served" translated into the most common languages spoken in the United States. If the language you need isn't listed here, remember that you can use a number of popular language apps including Google Translate.

Have you ever faced a language barrier on a serve? How did you handle it? Share your experience by joining our groups on LinkedIn and Facebook or contact us.