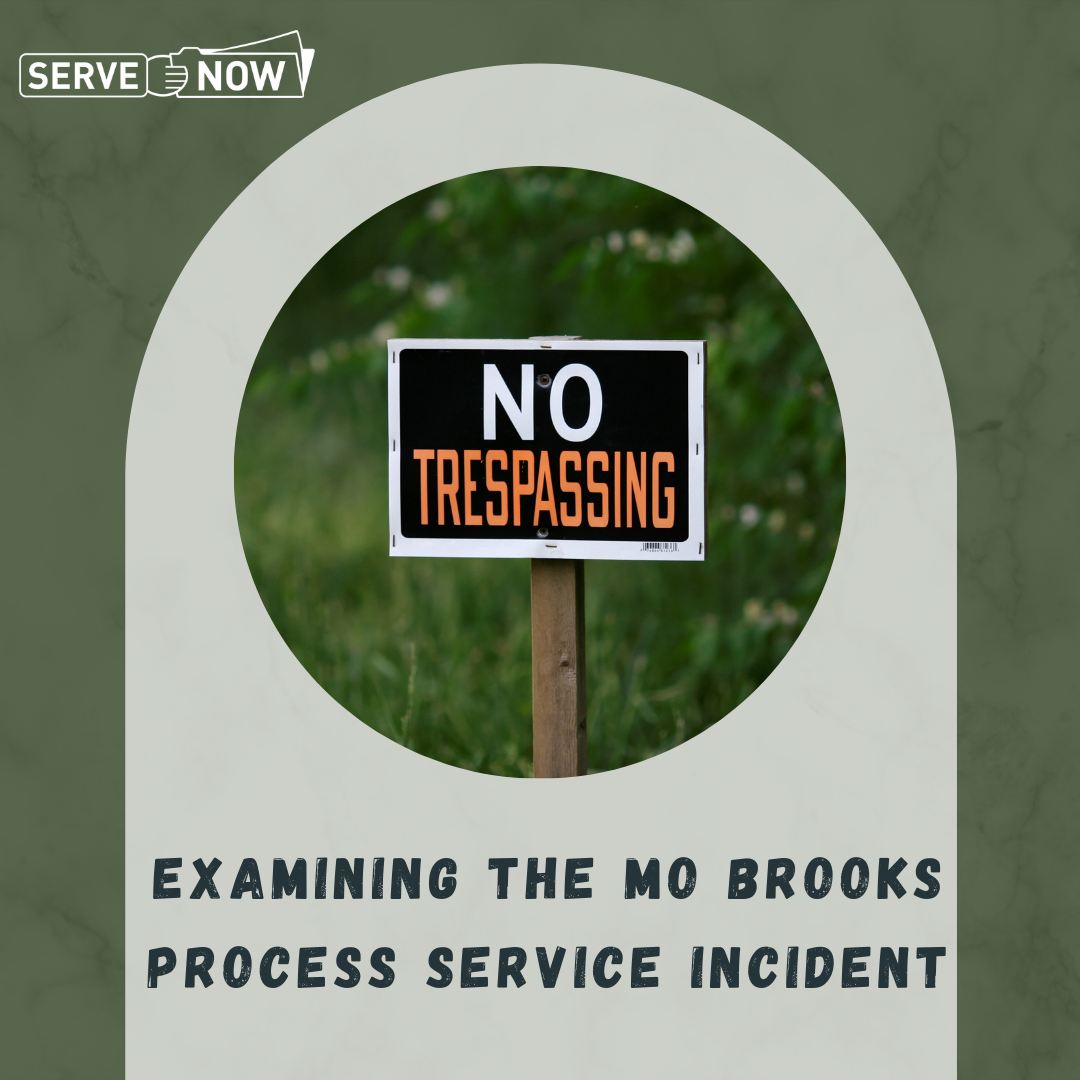 Making national news, Alabama congressman Mo Brooks claimed that a process server "illegally entered" his home and intimidated his wife as she returned from worship. The headlines caught the attention of those within the process serving community, with many debating the efficacy and legality of the service. The process server was slapped with a lawsuit by Mo Brooks and a warrant was issued for his arrest for trespassing on the congressman’s property.

The incident resulted in the Congressman’s wife filing a police report against the process server for trespassing when he served the court documents. In Alabama, this degree of criminal trespass is a misdemeanor. The warrant would only be issued if a magistrate felt a warrant was necessary after hearing the victim’s case. Ultimately, a warrant for the process server who served Martha Brooks was issued for illegal trespassing. If convicted, the misdemeanor could result in a fine and jail time. The matter is ongoing.

Process servers frequently run into claims of trespassing when attempting to serve an individual—sometimes with merit, and of course, there are other times the claims are without merit. The bottom line is that process servers must conduct their own due diligence with regard to being informed about local trespassing laws, and they must abide by them.

There are states that have passed laws specific to trespassing. However, it is important that the process server knows the legislation (for example, in some cases, it may only be related to a specific circumstance, such as allowing access in a gated community or impunity from trespassing on the property but does not allow entrance into an individual’s home). Additionally, there are other measures that process servers can take to ensure they are not putting themselves in harm's way or making themselves liable. Not doing so could result in criminal trespassing charges and/or being sued, which is what has occurred in the Mo Brooks process service situation.

Drop service occurs when an individual to be served is identified but does not physically accept the service. In those instances, and where allowable by the client and the law, the process server could complete the service on the Congressman by drop service. However, in discussions in the process serving community online, there was debate regarding substitute service being combined with drop-service; this would mean that the drop service would have needed to be done on the Congressman himself and not his wife. Further debate erupted over whether the state laws would even be applicable as the documents being served were from a federal court. According to the Federal Rules of Civil Procedure, Rule 4, the federal rules would apply. Many process servers brought up the pros and cons of drop service and how it could have affected the outcome of this particular situation.

At the end of the day, process servers are simply trying to do a job. It is important that process servers stay educated and aware of state laws and the Federal Rules of Civil Procedure. Even when faced with a difficult serve, such as with an individual avoiding service, process servers should still maintain respect and keep themselves out of harm’s way— and liability. The Mo Brooks process service incident should be a reminder to all process servers to brush up on both their state’s laws as well as the FRCP to ensure they are doing their job correctly and in accordance with all applicable laws. Process servers can learn more about becoming a process server and what information they should review by visiting the general resources available on ServeNow.com.