The Pros and Cons of Wearing a Process Server Badge 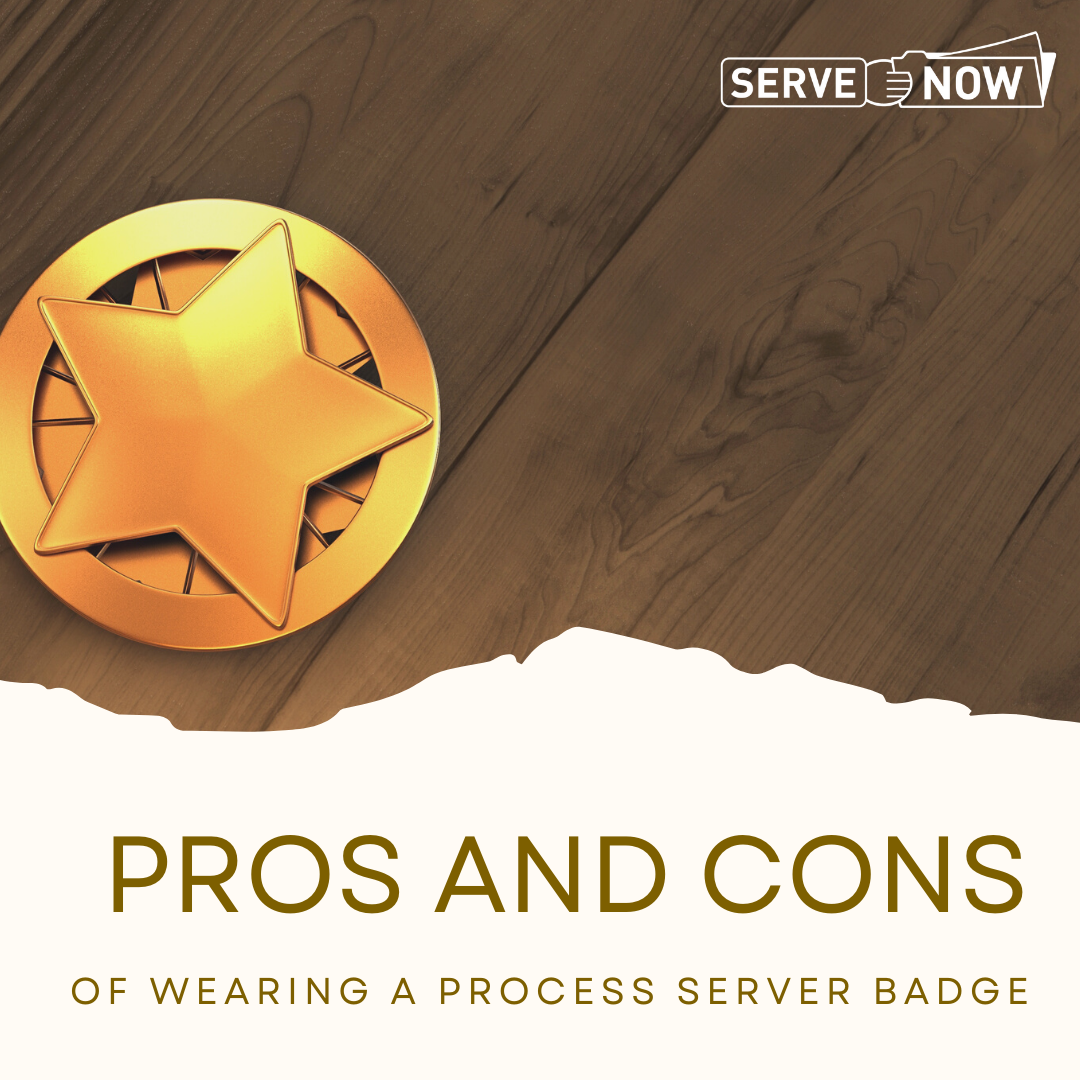 In the process serving industry, there isn’t a set uniform to get the job done, and many opt for street clothes or business casual attire. With that said, how do process servers show that they are a professional when there is otherwise nothing to distinguish them from an everyday person? One option that distinguishes a person as a process server is to wear a badge. While some states require process servers to wear a badge, other states prohibit wearing a badge. In other states, badges are optional. Where there is a choice, process servers who are starting out may question whether or not they should wear a process server badge. While Serve Now doesn’t have an official stance, we reached out to servers across the country and assembled some of the different viewpoints. Let’s review some of the benefits and drawbacks to wearing a badge.

Wearing a badge not only identifies your job, it also comes with some added benefits. Let's dive into the reasons why you should consider wearing a process server badge.

Wearing a process server badge can relieve fears of those who are uncertain who is knocking at their door. This can be helpful in neighborhoods where inhabitants are suspicious of outsiders or in situations where gatekeepers want to be sure they are letting in the right people. While the badge itself won’t necessarily protect a server, it can be helpful in preventing a situation from turning dangerous.

Tennessee server Chris Lake offered “We are sworn in my county, so we get one if we want one. Iit states clearly who and what I am. I find that it helps especially in rural areas or bad neighborhoods at night.”

In Detroit, Michigan, server Jerome Nickols advised that he wears a process server badge to identify himself: “I wear one for identification purposes, safety, legitimacy of my job and the reason I am there! I am not attempting to impersonate or imitate law enforcement. I've been wearing one for 11 of the 13 years that I've been serving. In and around Detroit, you better have something to identify why you’re at someone's house asking questions.”

Similarly, process server Nathan Moose acknowledged that “Service in bad neighborhoods in Chicago practically require a badge, body armour, and even a gun. And when that serve is in a Gold Coast highrise, a badge is a good way of getting past a doorman. Granted, these are situation/state specific and a badge can cause problems in other situations.”

Some process servers simply like that wearing a badge identifies them and makes it clear they are there to do an important job. The courts have charged the servers with carrying out this duty, and as such, the badge is reflective of that. Here’s what servers had to say:

Process Server Gregory Allen Carithers explained how he wears his: “I wear mine in a passport holder around neck with Lanyard. I slide my phone in the front pocket and get the best video you can get. It works great for letting people know who I am and why I am there.”

On another note, process server Dustin Patton advised that it is important for process servers to acknowledge the legal authority bestowed upon servers. He said, “Fortunately, we do have some authority because we are there on behalf of the court. That's why we can go on the property even when they have no trespassing signs.”

Process servers indicated that one of the top reasons for wearing a badge is that it can provide quicker access to places that would otherwise be more difficult to access.

Process server Willymae Williams doesn’t regularly wear a badge, but said that there are occasions in which it helps: “I only wear a badge of any sort when I'm going to a leasing office at the apartment complex.”

Chris Lake also explained, “It also helps in some places where "No Trespassing" signs are posted. We can [ignore the signs] here in Tennessee so long as we are not asked to leave. [It] helps at apartment complex management offices where they don't want to share information with just anyone, and it helps me move through the courthouse security a lot faster.”

A Wilcorp process server out of St. Louis said that badges are advantageous “when serving documents on someone located at banks, hospitals, prisons, jails, or out in the country where they will shoot you and claim they didn’t know who you are—or on a police officer at work.”

Another benefit of wearing a badge is that it can create a conversation starter. Solidifying a reliable network can not only provide friendship but a positive working relationship as well.

Server Johnny Sanchez explained that he wears a badge and the positive result he got from doing so: “I keep mine on my person at all times while serving in San Diego California. I’ve never had an issue. In fact, my fellow brothers in blue at the court house noticed it and sparked up a convo; now we’ve been good friends for years.”

While there are a number of benefits to wearing a badge, there are some things that may detract an individual from wearing one. Process servers sounded off on a variety of reasons why wearing a badge isn’t always the best choice for them.

Unfortunately, anti-police rhetoric in some parts of the country has made the occupation more dangerous. By wearing a badge, the general public may confuse a process server with a police officer thereby causing misdirected anger at a server. Several process servers spoke out and added that this was a reason why they did not wear a process server badge.

Los Angeles, California process server Carlos Meija stated, “I see some process servers wearing one. Not my thing especially with the anti-cop rhetoric—it makes it more dangerous to serve papers.”

Process server Dustin Patton said that he faces instances where he is mistaken for police: “A lot of people associate me with the police by just saying I have a summons—and that is without showing a badge.”

While server Chris Lake out of Tennessee is a proponent of wearing a badge, she did express caution that having one is not a free-for-all: “You have to have some sense about having one. If you have an evader, it’s a big shiny announcement about who you are. It can also make you a target because some folks just flat out don't like folks with badges. I’m proud of my badge in that it signifies the trust that our court and the people of Tennessee have put in me.”

For some process servers, the element of surprise is critical in serving hard-to-locate targets. Wearing a badge announces the process server’s presence and may result in the defendant evading service of process.

Process server Neil Guttenberg explains: “My best tool is dressing to blend in and the element of surprise. I'd rather have that than a badge.”

Simon Rolfe added that it is beneficial for process servers to avoid standing out: “At our firm At Your Service, a full service Process Serving and Legal Services firm operating in Ottawa, we prefer to not draw any added attention to a situation. Our servers are typically dressed casually so as not to draw added attention to ourselves at a target's residence or place of work when we are out on a job. In our experience, we find that in most situations, this approach works well.”

Badge or No Badge: Your Choice

Ultimately, whether or not you choose to wear a process server badge is personal preference unless it is dictated by law. The most important thing for all process servers to keep in mind is their personal safety while on the job and adhere to the Rules of Civil Procedure.