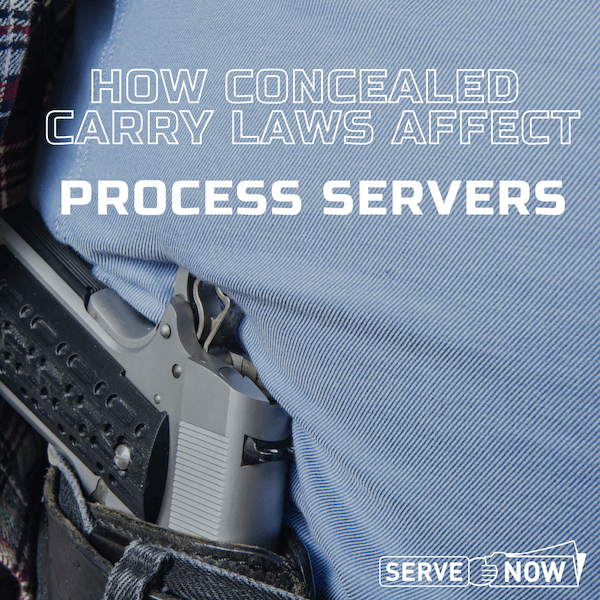 Process servers are tasked with a job that can be dangerous, and because of the sometimes threatening nature of the work, servers need ways to protect themselves. While legislation can help hold criminals accountable for assaulting a process server, as supported by the number of states that passed legislation creating stiffer punishments for those who are convicted of process server assault, it doesn’t do much to protect a process server who is actively being assaulted. The need for protection is ever-present, and process servers do everything from enrolling in self-defense classes to carrying both lethal and non-lethal forms of protection.

Last fall, Texas passed the Firearm Carry Act of 2021, which is commonly known as the Constitutional Carry law. The passing of this bill into law allows Texans to carry a concealed firearm without a license or permit provided they meet certain requirements. As more states pass various concealed carry laws, it creates a prime opportunity for process servers to consider how the ability to carry a concealed weapon could impact their job. Keep reading to learn about the benefits of concealed carry as well as some pitfalls that those considering carrying should know.

What Are Concealed Carry Laws?

The Second Amendment of the United States Constitution affords American citizens the right to bear arms; however, it has been the source of much debate throughout the country as to what extent and spirit of the amendment. Due to the disagreement regarding the meaning of the Second Amendment, lawmakers in various states have moved to pass laws that require documentation, background checks, education, and even a license or permit, among other things. Concealed carry laws allow legally eligible gun owners (eligibility differs from state to state but often involves a background check and/or some stipulations regarding criminal history and/or disqualifying limitations) over age 21 (though in some states, age 18, if the individual is an active duty or retired military member) to carry a concealed firearm. Some states require a license to do so, but other states, like Texas, do not require a license or permit to carry a concealed weapon.

Why Carry a Firearm While Serving

Unfortunately in many cases, process servers are bringing unwanted bad news to an individual; they are providing notice that the person is being sued, whether for debt, divorce, or some other reason, it is often news that an individual is not happy to receive. This can result in tempers flaring and being taken out on the messenger — the process server. The volume of cases of assault on a process server is prolific and widespread. This occurs so frequently that in addition to ServeNow’s PAAPRS campaign, Don’t Shoot the Messenger”, there is also a database that makes servers aware of dangerous addresses. The database, called Erin's List, was established to help protect other servers and in honor of Erin McCleskey, a process server who died while attempting to serve process.

There is an element of danger that is always lurking but that does not always come to fruition. While many defendants receive papers without issue, there are those who will attempt to avoid the serve, brandish their own weapon, attack the server, or worse. Furthermore, process servers also have to deal with dangerous animals while on the job. It is no surprise that process servers often look for ways to stay safe while serving papers.

For process servers who serve in crime-laden areas or those who just want to be able to defend themselves in any unforeseen situation, carrying a firearm (where legal) may provide them with the level of self-protection that they desire. A firearm can stop an attacker from attacking, whereas non-deadly forms of self protection, such as mace, body cameras, and/or other weapons may not do the job.

Additionally, openly carrying a weapon may be a deterrent to would-be criminals. If a defendant sees that the process server is carrying a firearm, he or she may think twice before letting their anger get out of control. Obviously, if the weapon is concealed from the defendant, the deterrent aspect would be moot; however, when brandished it may stop the situation from escalating.

The choice to carry a firearm comes with great responsibility. A lack of familiarity with the weapon could result in disastrous, even deadly, repercussions, so it is imperative that those who choose to carry know their weapon and how to use it. Being proficient with the weapon and knowing standard gun safety are absolute musts to keep everyone safe from intentional or unintentional harm, on or off the clock, as it is simply a part of responsible gun ownership. This is something that at times is overlooked by those unfamiliar with carrying a deadly weapon but who are desperate to keep themselves safe.

Jessica Saucedo, TxAPPS Administrator advised, “Process servers need to be aware of the laws for those who choose to carry, in addition to laws that protect armed property owners. Our experience is that most Texans love their guns; the same for the Texas process server community. What better way to promote firearm safety and awareness than to practice shooting? If practice makes perfect, we want any process servers who do carry weapons to be a perfect shot, for sure!”

Just prior to the start of the pandemic, TxAPPS was working on a legal fundraising event, Shoot for Legislation, for the group to be able to lobby effectively. Though this has been delayed, check the TxAPPS website for more information and a potential reschedule date.

Process servers should also be cognizant of their state’s laws, as well as any rules put in place by their employer. In 2020, several companies instituted a ban on carrying a weapon while serving, and those who disobeyed the rule could face termination.

Where Legal & Allowed, Your Choice

Ultimately, choosing to carry or not to carry is up to the server, state laws, and the company for which the server works (where applicable). If carrying a firearm is not something a server wishes to do, alternative self-protection options exist, as well as de-escalation methods, which can protect a server from harm. Check out this video to learn more about process server assault and how servers can protect themselves.