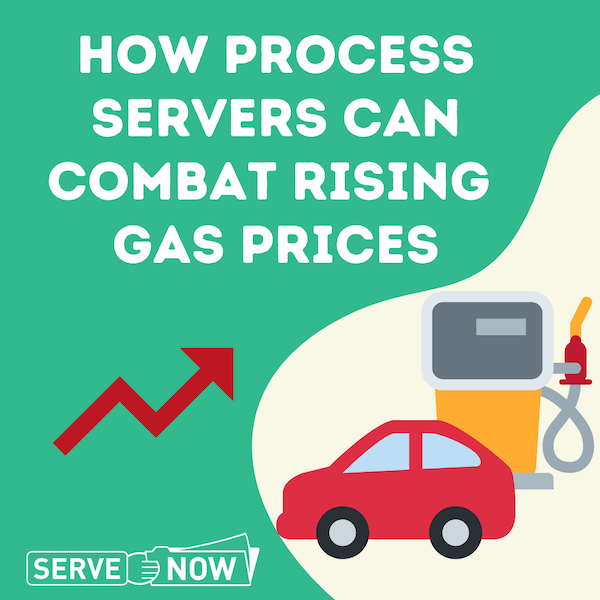 Part of the daily work for a process server includes traveling to serve an individual important court documents. Not only are process servers letting them know that an individual needs to appear in court, but they are also delivering the summons and complaint, which means that they need to physically go to that individual, whether at home, work, or in a public place. In some cases where a person is difficult to locate, process servers are tasked with making multiple attempts to serve an individual. While some process servers work in locations where they can walk or use public transportation, many must drive to do their job — and that means they’re using more fuel. With fuel prices soaring, process servers are starting to think more about their bottom line and how they can mitigate the impact high fuel costs will have on their business.

In Maryland, process server Brian McClernan advised that they have had to raise their rates some to account for the rising fuel costs. This sentiment was also echoed by California process server Robert Juarez, who said that clients are well aware of the rising fuel costs and the impact that has on the amount clients are charged. Process server Bob Deale advised that gas prices have affected everyone, both in and out of the process serving industry. He explained that process servers should regularly evaluate their rates and consider an increase because they will have gained experience and that it is not the lowest rate but the best service that brings in business. Out of Michigan, Neil Guttenberg expressed that process servers should not lose money because of rising costs. Similarly, in Washington, server Chris McCloy explained that like others in his area, they too raised their flat rate. McCloy added that they might have to reevaluate the current rate if gas rates keep climbing.

Overall, process servers need to ensure that the fees that they are charging are commensurate with the costs they incur to complete the job in order to have a profitable business model. This common-sense approach is one that many process servers have adopted.

Unless a process server has accepted a rush service job that disrupts a daily plan, most servers route their day’s service attempts in advance. By mapping their routes out by address before they head out, they can plan an efficient route that requires driving fewer miles.

On Whidbey Island in the state of Washington, process server Everett Wardlaw explained, “As fuel prices have continued to skyrocket, I have acquired a more fuel-efficient car and gotten better at route planning, maximizing my routes North and South for maximum efficiency.”

Process servers can choose from a variety of GPS routing apps, like ServeManager, to route their attempts most efficiently. Not only does routing in advance save fuel, but it saves time as well. Additionally, when process servers plan their route in advance, they can include a stop to fuel up at a gas station that has lower prices.

3) Shop Around For Fuel

One thing that process servers can do to mitigate rising fuel costs is to shop around. As we mentioned, process servers who plan their route can choose to stop at a gas station that has a lower fuel price per gallon than other stations. Process servers can use apps like GasBuddy, Gas Guru, or Upside to find fuel prices in a designated location and use that to determine where to stop for fuel. While in some cases it may be a slight difference in price per gallon, in the overall grand scheme, those pennies will add up. Additionally, some gas stations offer fuel rewards, making it more attractive to fuel up with their brand because users are able to cash in on earned rewards at the pump. Similarly, some use a dedicated credit card for fuel purchases, which makes each dollar they spend go further. By shopping around for fuel, process servers can get more for their money and ensure that they are not paying more than they must.

For most adults, how they drive is second nature. In a time when fuel prices are significantly affecting business, it may be time to reassess some habits. According to the US Department of Energy, idling a vehicle wastes gas and uses more gas than restarting it, so instead of leaving the car running, servers might be wise to turn it off while they make a service attempt. Additionally, driving at speeds over 50mph, driving with a heavy load, and driving on underinflated tires can all negatively affect fuel economy. By practicing smart driving habits, process servers can improve their fuel economy, resulting in having to buy less fuel over time.

5) Choosing a Fuel-Efficient or Electric Vehicle

While there’s no doubt that the used and new vehicle market is facing its own challenges with chip shortages and rising sticker prices, in the event that a server is in the market for a new vehicle, they might be wise to opt for a more fuel-efficient vehicle. Another option for servers with multiple vehicles is to use the most fuel-efficient vehicle available. Process server Don Womble said that he changed cars when gas prices began increasing, “To avoid having to raise my per-serve prices, I started driving my daughter's Mitsubishi. She gets 44 mpg versus the 20 mpg that my Nissan gets.” While getting a fuel-efficient vehicle won’t solve the problem of high fuel prices, it may help lower usage and improve fuel efficiency, which can provide beneficial fuel cost savings.

Serve Smartly and Save

While process servers can’t change the rates they have to pay for gas, they can implement some changes to their routine to make the sky-high gas rates not hit quite as hard. Interested in learning more about ServeManager to route your serves? Contact us today!