Just yesterday, District of Columbia Superior Court Judge Laura Cordero ordered that an evasive defendant could be served through text message and email. While recent discussions of service through email, social media, and other electronic means have dominated much of the conversation, this is one of the few times we’ve seen that action put to work.

The service was completed by Torri Schaffer of Torri’s Legal Service, a process service company with offices in Maryland and Washington, D.C. The order for text message and email service came after multiple attempts to serve a woman temporary protective order for stalking were unsuccessful. 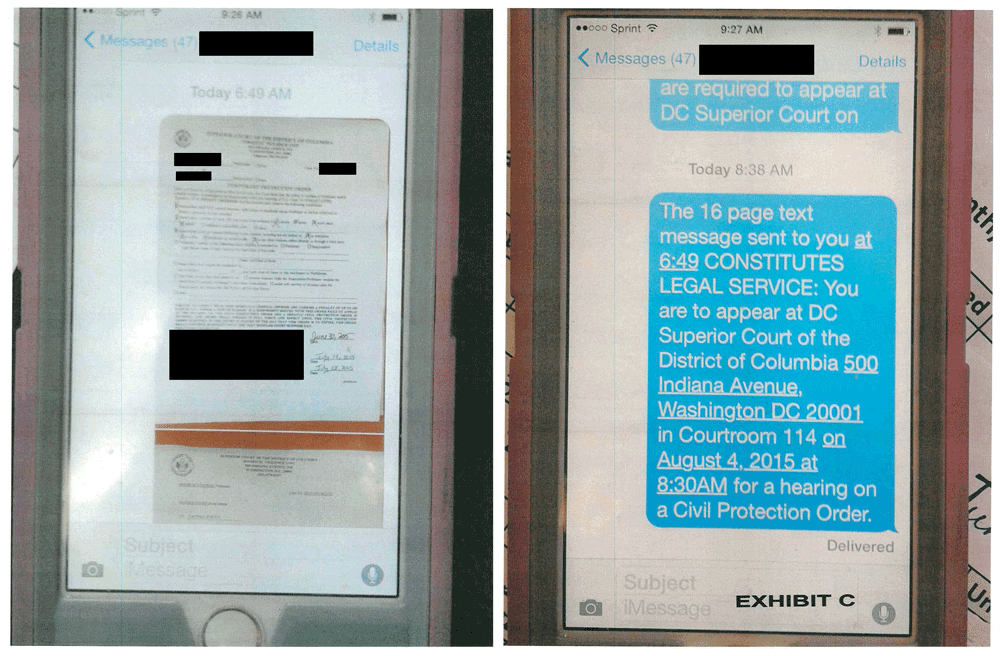 The complaint filed by Schaffer’s client made claims that the woman had been stalking him, including that she was texting and emailing sexual pictures of herself. According to the complaint, the stalking began after the two met on Match.com and went on a few dates and even after he broke it off. The complaint details several instances of the woman calling and texting him repeatedly, in some cases more than 200 times in one night, and even using an app to call from new numbers after her number had been blocked. While many of the messages were described as “agitated” and “angry”, some text messages and emails included unsolicited naked photographs, sexually explicit messages, and photos of positive pregnancy tests paired with false claims that she was pregnant.

Over 100 emails, 175 calls using the number disguising app, 360 calls in total, and over 280 text messages were received. The man’s voicemail would fill on a daily basis, and the calls were so frequent he was forced to keep his ringer turned off due to the constant calls.

Schaffer described the particulars of the allegations against the woman as “very abusive ways of using text message knowing the person was not interested.” The man involved had a civil protection order placed against her barring contact but needed her to be served for a hearing.

Having dealt with repeated unwanted advances via text and email, the client warned the woman that she was going to be served with a restraining order, and suggested that she set up an appointment to receive the papers from Torri’s Legal Services.

“I called her and told her we were coming to serve her, but she was very nervous and scared,” Schaffer said, noting that the woman asked to come retrieve the documents from Schaffer’s office at 11:00 a.m. the following day instead. The woman, however, did not show. “I called her back and asked her what was going on. She got very hesitant and started saying things like, ‘you can’t come serve me.’”

I called her and told her we were coming to serve her, but she was very nervous and scared. . .I called her back and asked her what was going on. She got very hesitant and started saying things like, ‘you can’t come serve me.

Over the course of a few weeks, multiple attempts were made to serve the woman, first at her home address. The secured building made it a challenge to get inside, and even when they did, the woman did not appear to be home. Two morning stakeouts were also unsuccessful.

“I almost feel that because she was given a head’s up as per the client, she may have not been coming home and could have been staying at a friend’s house,” Schaffer said.

With the deadline approaching, the client went to court for an extension. Judge Laura Cordero of the District of Columbia Superior Court Domestic Violence and Civil Division would not issue any orders other than an extension because service had not been attempted at the woman’s workplace.

Four attempts at the woman’s workplace were unsuccessful. The defendant, a government contractor, was working off-site at Andrew’s Air Force Base, which does not allow access to process servers.

“My process server was at her workplace four times waiting for her to come out,” Schaffer said. When pulling out of the parking lot after the fourth attempt the process server got in a fender bender and the police came. The manager of the government contracting office saw the police, came outside and asked to speak to the police officer privately. The officer returned and informed the process server that he was, “issuing him a verbal command that he was not welcomed in the building or on its premises.”

With the workplace no longer an option, the matter went back to the court.

On July 28th, Judge Cordero issued a verbal order in the District of Columbia Superior Court for service by email and text message, also indicating exactly what the messages should state.

“I was totally surprised that this was the method the court asked for. Very surprised,” Torri said. Recent stories of service of process through email or Facebook have noted the biggest hurdles to successful electronic service are confirming that the individual is the actual person using the email address or Facebook account and proving that they use it regularly. When asked about proving email and text message were a reasonable means to contact the woman, Torri referenced the complaint as well as input from the client himself. “It was written into the complaint,” Torri said, “and our client had all of the texts and emails saved from the woman and showed them to the judge.”

I was totally surprised that this was the method the court asked for. Very surprised.

After receiving the order, Torri sent the email below to the then-known email addresses for the defendant. The email was sent to a Gmail address and a .edu account on Tuesday, July 28th at 12:24 p.m. “Request for Assistance with Alternative Service” was used in the subject line. 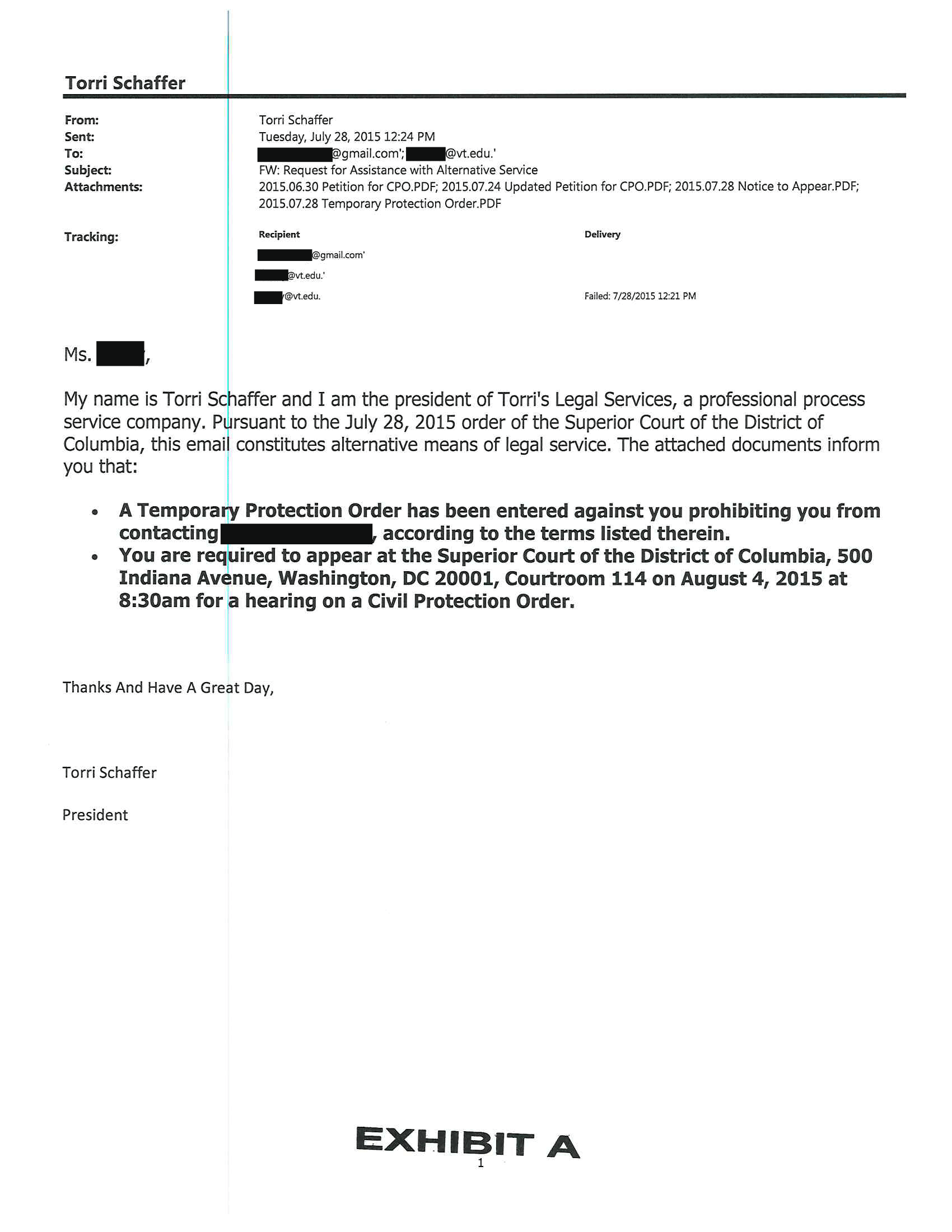 Email text: Ms. [redacted}, My name is Torri Schaffer and I am the president of Torri’s Legal Services, a professional process service company. Pursuant to the July 28, 2015, order of the Superior Court of the District of Columbia, this email constitutes alternative means of legal service. The attached documents inform you that: A Temporary Protection Order has been entered against you prohibiting you from contacting [redacted], according to the terms listed therein. You are required to appear at the Superior Court of the District of Columbia, 500 Indiana Avenue, Washington, DC 20001, Courtroom 114 on August 4, 2015, at 8:30am for a hearing on a Civil Protection Order. Thanks, And Have A Great Day, Torri Schaffer, President

But email service did not come without a few hiccups. One of the email addresses turned out to be a bad address. Schaffer received a receipt stating that delivery to the groups was complete, but no delivery notice was sent to the process server.

After receiving a new, up-to-date email address, Schaffer resent the email to a confirmed .edu email address. It was confirmed that the woman received the email, with the subject line “SERVICE BY EMAIL” sent on July 28th at 3:14 p.m. through the email delivery receipt below, received just a few minutes later at 3:19 p.m.

Message text: The 16-page text message sent to you at 6:49 CONSTITUTES LEGAL SERVICE: You are to appear at DC Superior Court of the District of Columbia 500 Indiana Avenue, Washington DC 20001 in Courtroom 114 on August 4, 2015, at 8:30AM for a hearing on a Civil Protection Order.

With the text message and emails sent, the defendant had been successfully served in accordance with Judge Cordero’s orders, and Schaffer began drafting her affidavit, including copies of emails and photos of the text messages as exhibits to ensure it was permitted as legal service. 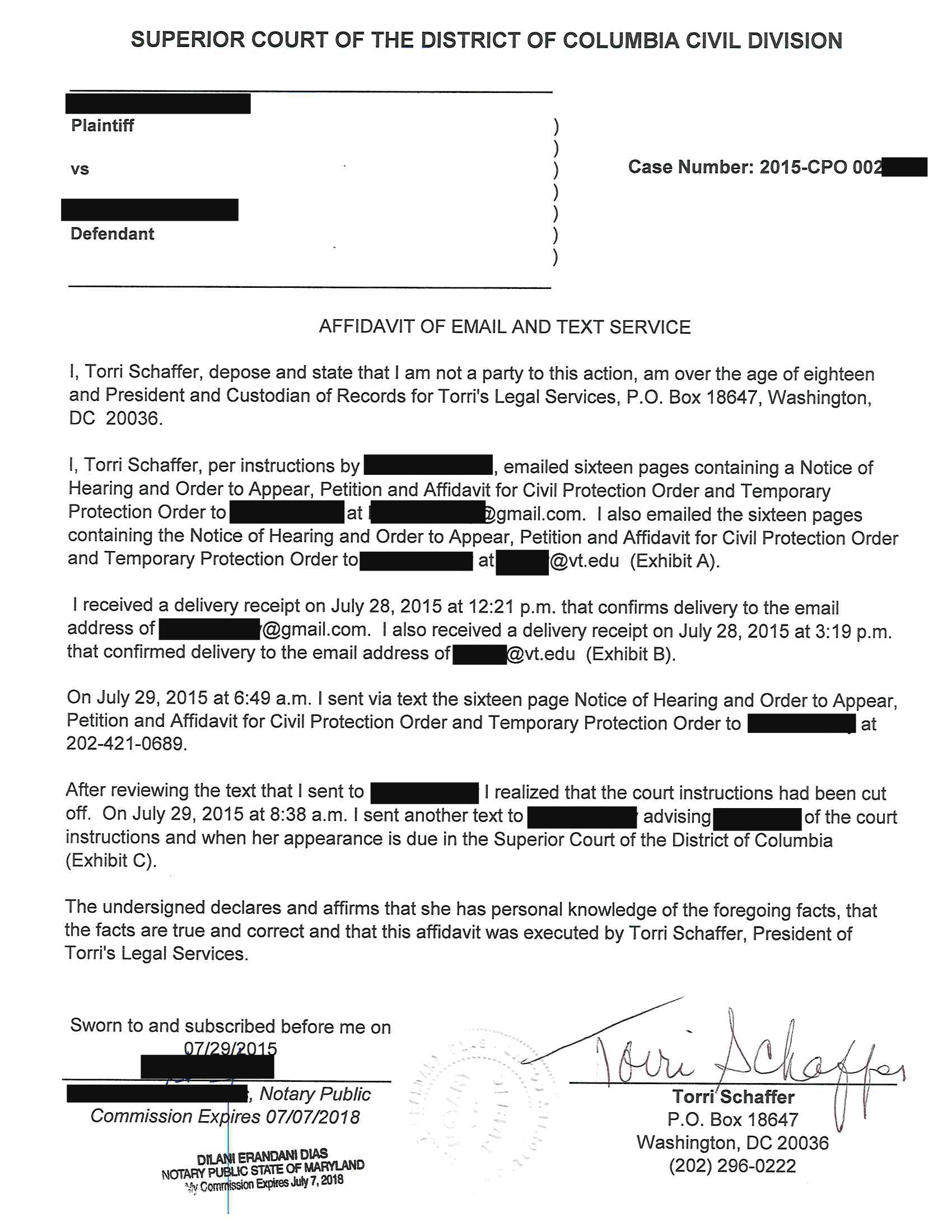 As for the text message itself...

“I got no response,” Schaffer said.

The client, however, was absolutely ecstatic.

With her first text message and email serve behind her, Schaffer says that the experience was cool, but a little strange, particularly in that she was not asked to serve the papers via regular and certified mail, a much more common means of alternative service. We have reached out to Judge Cordero and the District of Columbia Superior Court Public Affairs Office for comment, but the DC Code of Judicial Conduct precludes judges from commenting on pending cases. However, Judge Cordero's order states that reasonable attempts for personal service had been made and established that the respondent had regular contact with the petitioner and the process server through both the phone number provided and the email address. Schaffer speculates that it was due to the sheer amount of evidence that this woman was very well-versed in email and text message communication.

“This is just the world of electronics and being connected. I think that for people who are evading service and are electronically savvy this will be a means of alternative service,” she said. Schaffer believes that were she even more tech-savvy she likely would have spent less time and less cost on the electronic and text message service, and while it is a new development in the process serving industry the process server says she does not hope for more requests for electronic service, stating that it prohibits her process servers from making a living.

But Schaffer does say that process servers do need to be prepared to take on more tech-savvy means of service. “Process servers need to embrace change, that’s for sure, and see that this is the future for the hard to serve defendants,” she said. “This is not going away.”