Service of Process in Prisons 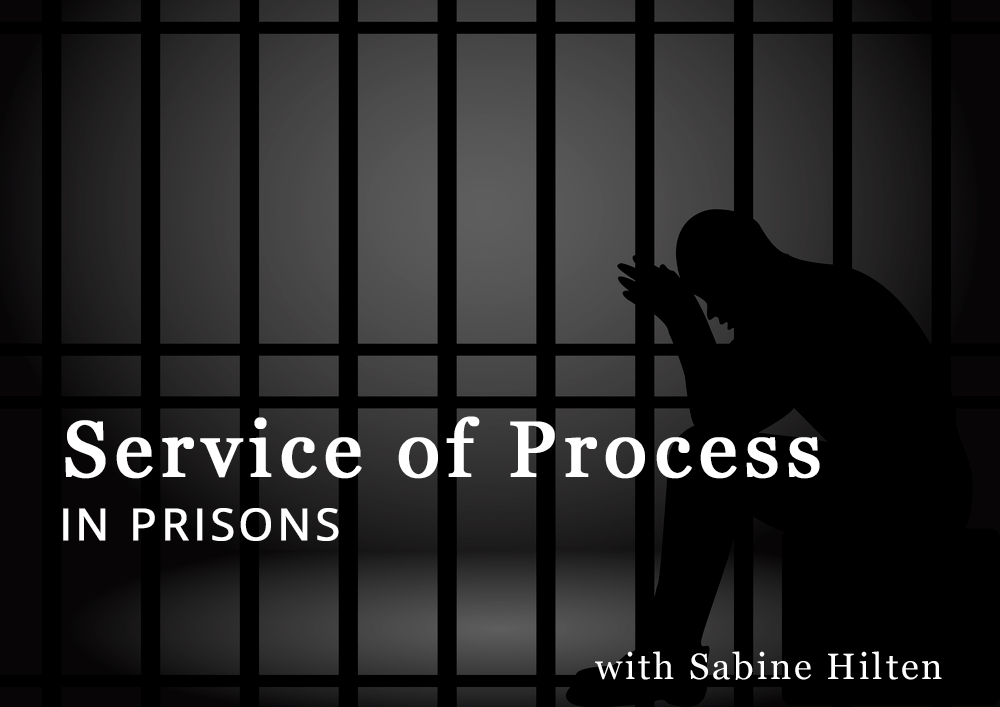 A Brief History of Incarceration

The history of penal codes and prisons is fascinating and terrible, from the Code of Hammurabi in 1750 B.C. (dedicated to “an eye for an eye” vengeance) to the Workhouse, the 16th-century solution to poverty. There, the poor were clothed and fed and worked to the bone, building more Workhouses. Repeat petty offenders were sentenced to death or banished to a penal colony. Russia had Siberia. England had Australia and America.

The Civil War and its aftermath revealed vast differences in Americans’ core values regarding freedom and slavery, crime and punishment, federal laws and states’ rights. Prison reformers were at the mercy of societal conflicts, especially in the South where prison labor filled the void created by the abolition of slavery. But five tumultuous years after the end of the War they had a reason for hope. The National Congress of Penitentiary and Reformatory Discipline called for a refined classification system to assess prisoners’ needs and an end to brute force used to effect compliance with prison rules.

In the mid-1980s, federal and state prisons were bursting at the seams with addicts, street corner dealers, cartel kingpins, and every other player in the War on Drugs. Two decades later, the War on Terror created the need for more beds, more cells, more prisons. Corporations use to managing food service and transportation for the prison system saw the strain that the revved-up incarceration rates put on federal and state governments and pounced at the opportunity to provide relief. Corrections Corporation of America now owns or manages over 50 facilities in 19 states. The Geo Group, Inc. (formerly Wackenhut Securities) has 98 facilities on three continents. Both are publicly traded companies.

In the 21st century, the prison industrial complex is a multi-billion dollar industry that pays dividends. 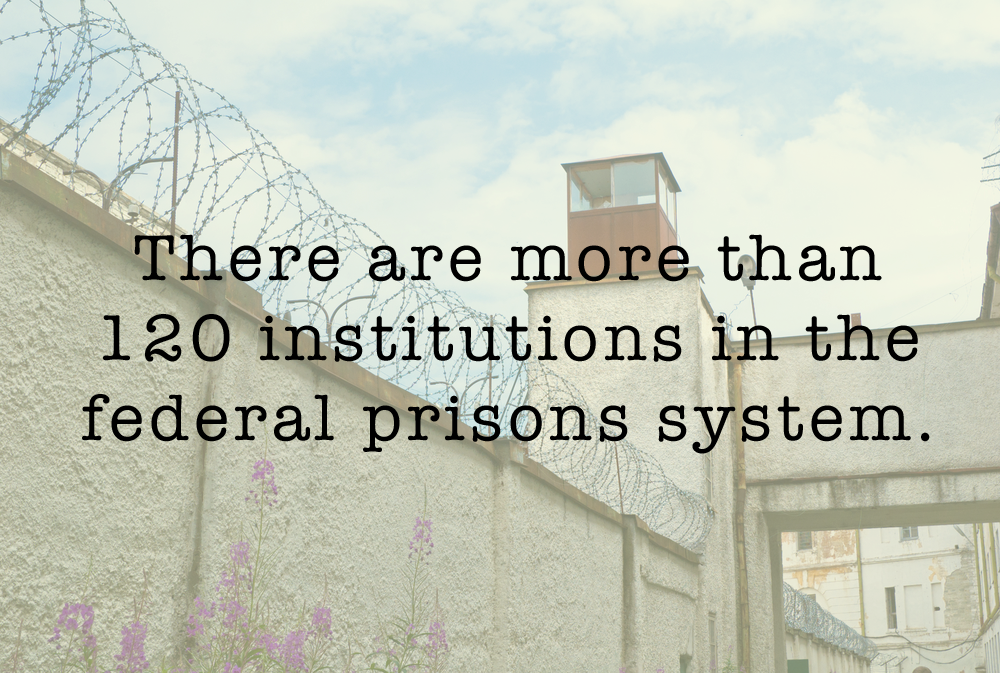 Established in 1930, the Federal Bureau of Prisons (BOP) is a division of the United States Department of Justice. Today, there are more than 120 institutions in the federal prisons system. Prisons have five security levels. They are determined by staff to inmate ratio; internal security and supervision; and external security, including detection devices, towers, and patrols.

Medium security institutions include “Federal Correctional Institutions” and four medium security penitentiaries. They have a higher staff to inmate ration and more external and internal controls than in the minimum and low-security facilities.

High-security institutions are also known as “United States Penitentiaries.” The perimeters are composed of solid walls and/or reinforced fencing. They have a high staff to inmate ratio and close supervision of inmate movement. Inmates are housed in cells.

Administrative Facilities house inmates at all security levels. They are used for individuals awaiting trial or transfer from one institution to another, and as medical facilities for inmates with serious illnesses. The exception is USP-Florence ADMAX, the only “super maximum” facility in the federal prison system. ADMAX inmates include Theodore Kaczynski (the Unabomber), 9/11 terrorist Zacarias Moussaoui, and Terry Nichols, the co-conspirator in the Oklahoma City bombing.

Federal prisons in some states only allow service of process by law enforcement officers. 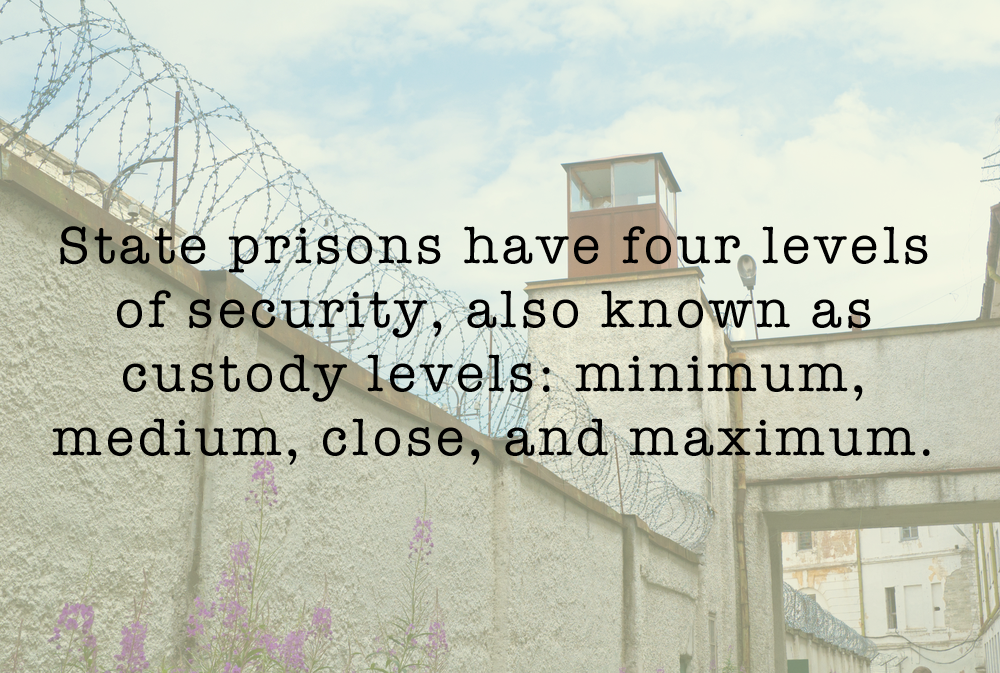 State prisons have four levels of security, also known as custody levels: minimum, medium, close, and maximum. Often, there is more than one level of security housed in a unit. Custody level is based on the likelihood of a prisoner escaping or committing violence.

Minimum custody is for inmates who present a low risk to the public and to staff. They do not require controlled movement within the prison. They may work outside the secure perimeter of the prison or on community work crews.

Medium custody is for inmates who present a moderate risk to the public and to staff. They require limited controlled movement within the prison and cannot work outside the secure perimeter of the prison

Close custody refers to inmates who present a high risk to the public and to staff. They require controlled movement within the prison and are not allowed to work outside the secure perimeter of the prison.

Maximum custody is reserved for inmates who present the highest risk to the public and to staff. They require escorted movement in full restraints within the prison. They have limited work opportunities within the secure perimeter of the prison and are subject to frequent monitoring. They are housed in a single cell setting.

Custody levels determine an inmate’s out-of-cell time and the type of contact that he or she is allowed to have with visitors. 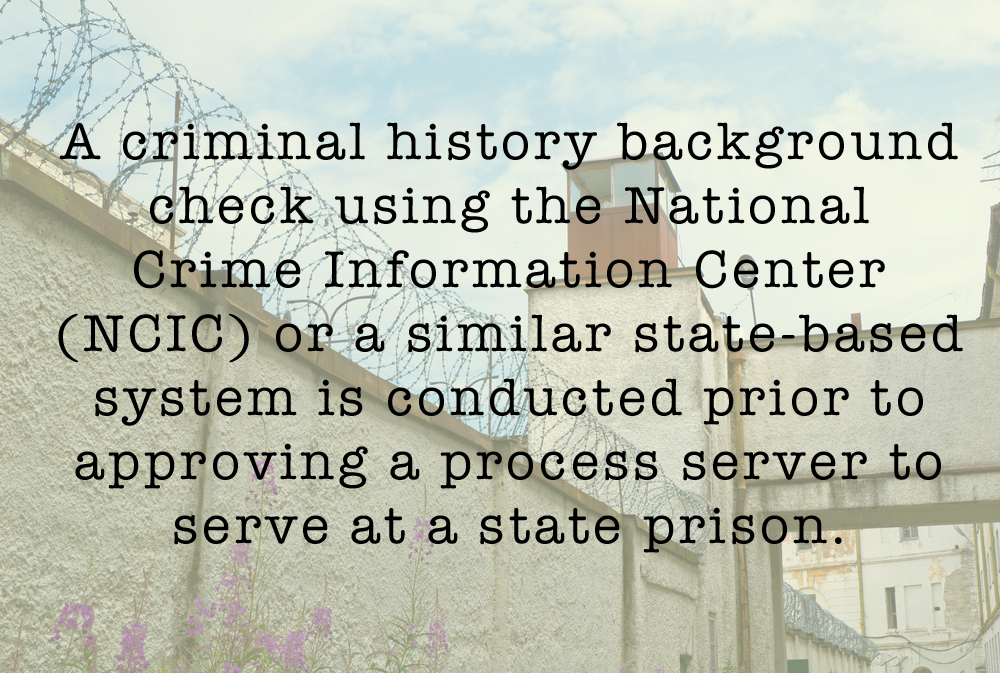 Service of Process in State Prisons

Process servers play an important role in ensuring inmates’ rights to due process. But there are three things they should remember when serving documents in prison:

A criminal history background check using the National Crime Information Center (NCIC) or a similar state-based system is conducted prior to approving a process server to serve at a state prison. This is often handled by a CO I (Corrections Officer, Level 1) in the records department. Service of process is coordinated with the CO II or CO III of the unit where the Subject is housed.

Process servers should not assume that the Subject that they were hired to serve is readily available at any time. Inmates attend classes, counseling, and 12-step programs. Minimum security inmates will not be at their unit during regular business hours if they are working for outside vendors. (In Arizona, they are allowed to work on firefighting crews during wildfire season.) Prison staff prefers to transport inmates back to their unit after they have completed the majority of their shift. This way, inmates lose less time and wages.

Contraband is defined as any item that could be a detriment to the safe and orderly operation of the prison. This includes cell phones and cell phone chargers, cameras, video, audio and related equipment. Contraband is also defined as any item that could be used as an aid to escape and any item that could be used to disguise or alter an inmate's appearance. It is best for process servers to limit the items that they bring with them into prison to their driver’s license, process server ID card, vehicle key, and the vehicle remote control entry device, and the documents to be served (with all staples, paperclips and binder clips removed).

It is recommended that process servers call to schedule service of process. This shows respect for prison staff—and for the Subject to be served.

Sabine Hilten is a certified process server and the Qualifying Party for her own private investigation agency. She is the lead instructor and administrator at Leading Edge Legal Ed, which provides online continuing education to legal professionals in the United States.

This article was written by an industry guest contributor. If you are interested in submitting a guest post or have an article suggestion, send an email to [email protected]

More articles on how to serve in difficult situations: