Process servers across the United States are celebrating another win, this time in New York, in the quest to protect process servers from assault. New York Bill S2991A, introduced in February 2015, was passed and signed into law by Governor Andrew Cuomo on August 19, 2016. It will go into effect this upcoming November. Although similar laws are in place in Illinois, California, and Florida, New York will be only the fourth state in the country to have legislation in place to protect process servers. 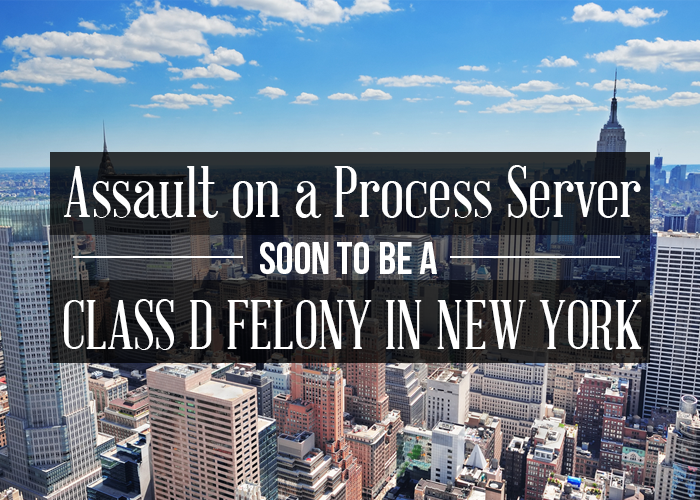 The process serving profession, which ultimately helps to protect the American right to due process, has been grossly neglected when it comes to legal protection. Scores of process servers across the country have been the victims of assault while attempting to deliver court documents. We’ve reported on several major assaults that have made headlines, but there are significant numbers that go unreported because little can be done in states without protective legislation.

This lack of reporting on process server assault and protective laws helped spark the PAAPRS (Promoting Assault Awareness and Protective Regulations for Servers) campaign, which continues to encourage lawmakers to do their part by legislating fair treatment of process servers for their part in precipitating due process. The PAAPRS campaign is comprised of process servers, both individuals and corporate entities, process server associations, and ServeNow, who are all vocal and dedicated to changing legislation across the country.

One of the steadfast supporters and a co-founder of the PAAPRS campaign, Adam Camras, CEO of ServeNow, was asked to write a letter to Governor Andrew M. Cuomo imploring him to sign the New York Bill. You can read an excerpt of that letter below

"The role of a process server is to help preserve every American’s right to due process. Without being served notice by a process server, a court case or legal matter could advance without the knowledge of your residents. For the women and men that go out in the field every day on behalf of the courts, we need to keep them safe… I ask that you look closely at Bill #S2991A and take into account the New York citizens that deserve proper notice and the process servers that need to feel just a little bit safer as they as they go out and perform this important part of the judicial process."

The letter also included a link to the #dontshootthemessenger video, a cornerstone of the campaign (which you can watch below).

The New York Bill’s language was spearheaded by another vocal and avid champion of legislation protecting process servers, Larry Yellon, current President of New York State Process Servers Association (NYSPPSA) and current Second Vice President (former President 2011-2013) of the National Association of Professional Process Servers (NAPPS). He was present when former Illinois Governor Pat Quinn signed the Illinois legislation making an assault on a process server a felony, and he has been working to enact a similar law in New York since 2012. Finally, he, along with the rest of the individuals who have worked hard to get the New York legislation passed, can have the satisfaction knowing that their time was well spent.

Frankly, if not for the Illinois law that was signed in August 2011, this wouldn’t have happened. I used the Illinois law as the basis to get this law. I took that law to New York and gave that to the legislatures, and that’s basically all I needed.

Of his work, Yellon explained, “Protecting process servers, my colleagues, has been a passion for me. It will always be. This is significant to protect us from assault, but to elevate our significance in the legal community. The fact that we were important enough to receive this type of designation is very important. We have the significance that we deserve and that is something that creates a positive self-image for process servers. It will help in future legislation. We’ve created a name - they laid the groundwork for us. We all belong together because we’re all part of the same family. It was a great day when the governor signed it. I couldn’t be happier.”

Although this is a major win for the process serving community, there is still much work to be done to get legislation protecting process servers passed in all states. Yellon hopes that this new law will help further the case to change legislation in other states. He explained that the Illinois law was critical in getting the New York bill signed. “Frankly, if not for the Illinois law that was signed in August 2011, this wouldn’t have happened. I used the Illinois law as the basis to get this law. I took that law to New York and gave that to the legislatures, and that’s basically all I needed.”

Most recently, Arizona and Hawaii legislators have been working to get similar laws in place for their process servers. Hopefully, the recent passing of the New York law will provide the impetus Arizona and Hawaii legislators need to enact change. To get involved in the cause, look to the PAAPRS campaign, your state process server association, as well as NAPPS, which is a national organization.

We congratulate and commend Larry Yellon and the entire NYSPPSA for seeing this bill through and landing a major victory in protective regulations for process servers.